We will gladly
advise you.

Humidity has always been an important part of life for people, fauna, flora and products.

We experience relative humidity ourselves on a daily basis, often unknowingly. F. e. the morning dew is the humidity of the night air, which condenses in the cooler morning hours.We apply its laws, for instance when we have a sauna, we increase the temperature of the air so much that the air absorbs a lot of moisture. We recognize the high influence of humidity upon our well-being. Everyone is familiar with the sensation where the mucous membrane of the nose dries up during the heating period during the winter, placing everyone at risk of catching viral infections or the unpleasant sultry feeling that we experience in the prevailing high humidity during the summer.

Relative humidity plays a major role, not only in what we perceive to be comfortable but also for the condition of many things.In many production processes, goods require the correct level of relative humidity as otherwise they lose their properties. We are thinking for example here of paper which is hygroscopic and which causes problems if you try to print on it under incorrect humidity conditions, or storing fruit and vegetables which start to shrink and ripen too early if stored in the wrong humidity conditions, of computer systems which switch off, if the air around them is too dry or too humid, of sausage and cheese, of storing steel, preserving steel armour, drying of tobacco, the list is endless. 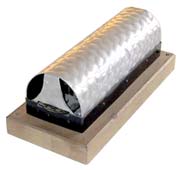 But what is relative humidity?

The composition on the left is called "dry air" and occurs very rarely naturally.

"Humid air" contains (visible or invisible) water vapour to a higher or a lower extent. Where it is visible, it is mist.

Air, as dealt with in air-conditioning technology, can be regarded as an "ideal gas". Consequently, there is a prevailing "mix of water vapour and air", meaning that "Dalton's laws of gases" apply.

The total pressure of the gas mixture comprises the partial pressures of the air and of the water vapour.

The air temperature is a measure of the warmth of the air measured in °C.

Relative humidity is a "dimensionless quantity", it is a ratio. You will often find the description %RH. A figure on its own, e.g. 50 %, often makes no sense, as other quantities are also given in %, such as 50 % actuating variable. To avoid any misunderstandings, Galltec+Mela retain the description 50 %rh.

Relative humidity is used to identify the level of humidity in the air and is determined as follows: